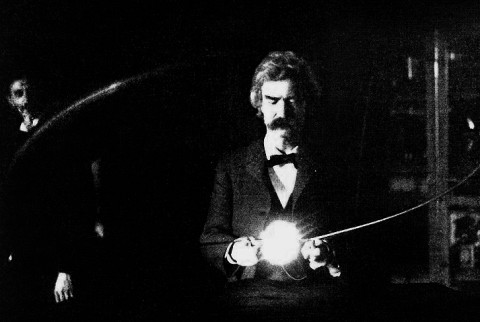 You’ll get a charge out this picture taken a very long time ago yet reminiscent of current photo studies. It captures Mark Twain tinkering in the laboratory of the great inventor, Nikola Tesla. According to the University of Virginia, the photo was taken in the spring of 1894, when Century Magazine published an article called “Tesla’s Oscillator and other Inventions.” Still available online, the article begins:

“[Mr. Tesla] invites attention to-day, whether for profound investigations into the nature of electricity, or for beautiful inventions in which is offered a concrete embodiment of the latest means for attaining the ends most sought after in the distribution of light, heat, and power, and in the distant communication of intelligence. Any one desirous of understanding the trend and scope of modern electrical advance will find many clues in the work of this inventor. The present article discloses a few of the more important results which he has attained, some of the methods, an apparatus which he employs, and one or two of the theories to which he resorts for an explanation of what is accomplished.”

Could be published today and still be intriguing.  Some things never get old.